I was recently given the chance to step outside of my comfort zone and interview a filmmaker and author for the Wicked Horror site. I enjoyed the opportunity and the book, so I thought I’d talk about it here on the blog and bring it to the attention of a wider audience. The Horror Anthology Handbook is a bit outside the range of my typical book selection, as it’s a non-fiction piece centered on filmmaking. That being said, I was pleasantly surprised with how much I connected with the topic, and I’d recommend this read to fans of both horror fiction and film alike. 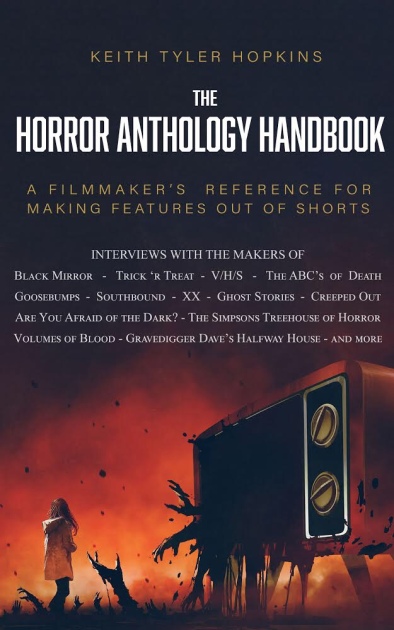 Filmmaker Keith Hopkins spent the better part of two years interviewing a number of people involved in the making of horror anthology films. His knowledge of horror anthology films and what he learned about the filmmaking process really shows in this book, and it’s written in a manner that draws the reader in and holds their attention from beginning to end. I enjoyed the setup, as the book is broken into sections. It begins with a great introduction that draws on the author’s beginnings with regards to storytelling and an interest in horror. Following the introduction, Hopkins presents his interviews with filmmakers, which I found to be very informative just as a fan. For those who like to view horror films, you’ll enjoy the background behind the making of the movies, and for those who aspire to make a horror anthology film, you’ll gain valuable insight to inspire you on this journey. The interviews are set up to include a background on the film, the question/answer section, and a takeaway. They are structured well and feature not only directors, but a wide variety of roles within the field, including editors, writers, producers, and actors.

Following the interviews, there is an extensive history of horror anthology films from the Silent Era to modern day. As a horror fan, this was probably my favorite part. The author first discusses different wraparound styles used in horror anthology films, and then goes in depth for each film listed, noting the wraparound style, notable cast and crew, and descriptions of each piece in the anthology. I walked away from this section with a long list of films that I still need to watch, and feel like I’ll view them in a new light after reading this book.

Overall, this is a fun read for horror fans. I think there’s something here for everyone—readers, moviegoers, writers, and filmmakers. This anthology is packed full of insight into the creation of a horror anthology film, and its focus on storytelling will appeal to a variety of readers.

Craig Wallwork’s Labyrinth of the Dolls is an excellent follow-up to his novel Bad People. Sometimes, a sequel doesn’t have that something special that’s found in the first book, but that’s not the case with this one. I’m a fan of both, but I think that this new release might be my favorite so far.

Wallwork has created another solid read with this novel. This is a perfectly paced thrill ride, packed with moments of shock and suspense, but the best part is that the story has heart. I loved following the characters that the author created in the first book, digging deep into their past and understanding their motives. Another aspect that stands out is how the author is able to create empathy not only for the protagonist, but for the antagonists as well. I found this especially true in Bad People, and it also applies in this follow up.

I think I mentioned this in my review of the first novel, but it’s worth repeating: if you’re a fan of gritty crime thrillers such as True Detective, The Killing, or Se7en, you’ll enjoy this read. This one took me on a dark and dreary adventure, but left me with a bit of hope, which I enjoy. Books like this make me want to seek out more thrillers in general, and I would love to see this series continue or make it to the big screen.